What is Lung Cancer?

What is Lung Cancer? 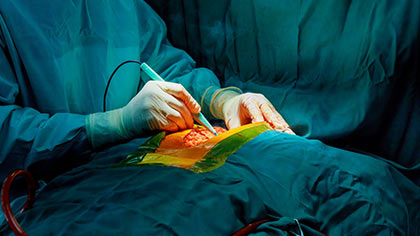 The lungs are two large organs made of spongy tissue, which lie inside the chest under the rib cage. When we breathe in, the lungs absorb oxygen and deliver it to the bloodstream. The oxygenated blood is then pumped throughout the body by the heart. When we exhale, the lungs remove carbon dioxide, a waste gas, from the bloodstream.

Lung cancer is the uncontrolled growth of abnormal cells in the lung. Normal lung tissue is made up of cells that are programmed by nature to create lungs of a certain shape and function. Sometimes the instructions to a cell go haywire these cells then start to reproduce in an uncontrolled manner without regard for the shape and function of a lung. This leads to formation of tumors that clog up the lung and make it stop functioning as it should.

Lungs are a large sized organs, thereby Lung cancer may grow for many years without getting detected or causing suspicion. In fact, lung cancer can spread outside the lungs without causing any symptoms. Adding to the confusion, the most common symptom of lung cancer, a persistent cough, can often be mistaken for a cold or bronchitis.

What are the types of lung cancer?

NSCLC are the most common lung cancers, accounting for about 80% of all lung cancers. NSCLC can be divided into three main types that are named based upon the type of cells found in the tumor:

In the beginning of the century, lung cancer was considered to be rare. But now it has reached epidemic proportions. This is the leading cause of cancer death in developed countries and is rising in alarming rates in developing countries. Estimates of the worldwide incidence and mortality from 27 cancers in 2008 have been prepared for 182 countries as part of the GLOBOCAN series published by the International Agency for Research on Cancer recent. Results for 20 world regions, summarizing the global patterns for the eight most common cancers have been made in this report. Overall, an estimated 12.7 million new cancer cases and 7.6 million cancer deaths occurred in 2008, with 56% of new cancer cases and 63% of the cancer deaths occurring in the less developed regions of the world. The most commonly diagnosed cancers worldwide are lung (1.61 million, 12.7% of the total), breast (1.38 million, 10.9%) and colorectal cancers (1.23 million, 9.7%). The most common causes of cancer death are lung cancer (1.38 million, 18.2% of the total), stomach cancer (738,000 deaths, 9.7%) and liver cancer (696,000 deaths, 9.2%).

Cancer is neither rare anywhere in the world, nor mainly confined to high-resource countries. Striking differences in the patterns of cancer from region to region are observed.3 5-year survival rate for lung cancer has improved only marginally from 5% in the late 1950s to 14% by 1994. This is in contrast to the 5 years survival of 52% in other cancers.4,5